I am a 28 year old geotechnical engineer working in the Midlands. Living the dream in a cute Cotswold cottage with my partner Emma and our Siamese cat Jemima. I’m passionate about the countryside and farming and a total soil geek which has accidently led to a career in construction not agriculture!

I come from a farming family, my grandparents were farmers, my parents met whilst my dad was on placement from college at the farm my mum’s father managed. My mum was a member of her young farmers club, my grandad’s four brothers are employed in farming, and part of the rural community in Derbyshire. The path seemed always set for me to follow in their footsteps.

We moved to the south of England following my dad’s career progression, to manage a large mixed farm down there. I am an only child and having to move schools a fair amount as a child meant although I did make friends with children from neighbouring farms I didn’t have strong friendships. I therefore very happily I was content in my own company. I was fortunate to have various unruly ponies to keep my occupied over the long summers, spending many hours independently exploring the farm, and helping my dad out with chores.
Due to being an only child I took the full impact of my mums enthusiasm for creating the ‘perfect child’ insistent I must get straight A’s and perfect spelling test results etc.

Moving again in my early teens we relocated to the Midlands, once again requiring new friendships to be made, I predominantly focussed on school grades and working at local horse yards. I was forbidden from accessing the internet throughout out my youth, it being seen as a dangerous distraction, so once again isolation was a theme of my happy but naïve teenage years.
We moved again when I was in sixth form, and I ended up going to a town centre 6th form college, everyone already had their own established friends and I felt very different, being from a rural background.

I following encouragement from my parents attended a young farmers meeting, I think for the first three times I attended I didn’t utter a word to anyone, but slowly and surely at 18 I finally felt like I had people I could truly call friends. I entered flower arranging and baking contests, failed epically at sports, went to parties, rallies and generally started to enjoy carefree final years of my teens.

There was a realisation over these years that I was different, young farmers was at times very much about lads being laddish, the forming of relationships, alcohol fuelled dancing. My mum used to comment ‘oh he’s a nice lad’ or my dad would say ‘as long as you bring a guy home who has a family shoot’. Safe to say I didn’t bring anyone home, I just assumed I just ‘hadn’t found the right guy’ when I departed to university.

At university, now well practiced at making new friends I found myself a great group in both the university riding club and with people in my halls. I knew members of the LGBT+ community at university but still the penny didn’t drop. I had a great time at uni, and ended up dating one of my male best friends, we were on and off for about four years, there were great times and happy memories, but I still kept circling back in my mind to feeling that there was something missing.

It came to boiling point at age 22, and the realisation that if it wasn’t working out with my best friend who could it possibly work out with?! There just wasn’t the spark that was needed, and ended being up, on my side at least, very much platonic. I think over my teen years there had been niggling thoughts that I might be interested in women, and now looking back there were glaringly obvious signs but it genuinely never really occurred I could be a lesbian. I had just assumed I had to be straight, fit the predefined mould.

It took about a year of life evaluation and much googling and watching of LGBT web series to figure it out. All my friends, moving back to the countryside following graduation, were made through sharing horses or going to young farmers again, none of which I felt very comfortable about discussing my sexuality with.

A leap of faith had me join a dating website for women, and after almost losing confidence and accepting life eternally single, I met my now girlfriend. Emma and I have been together for 4+ years, and life is better than I could have ever have hoped and imagined.

We live in a cute Cotswolds village, we have a cat (of course!). We found we have so much in common, both from rural communities with parents and family working in agriculture. I would have never have met Emma, without the assistance of online dating, there’s zero visibility really of the LGBT+ community in rural life.

Coming out to my family and friends was stressful, but the thought was far worse than reality so I’ve been very lucky, as they have all been very accepting. I am confidently out to my work colleagues now, although that was a process that took time. Being involved within industry groups for LGBT+ people working within construction helped a lot, finding out there were people like me (although not that many) gave me the confidence to be my authentic self. Aside from several poorly judged jokes by a couple of guys on site (which was nothing I wasn’t used to coming from having young farmers as friends) being out on site has been a positive experience.

Living in a rural community, being in a lesbian relationship, we haven’t been treated any differently than a straight couple might, but I haven’t really come across many other LGBT+ people. I have recently returned to university part time to undertake a MSc, and the culture shift towards acceptance and openness of sexuality and gender constantly surprises me, so much progress has been made in the 10 years since I was first at university, giving me hope that this may progress through other areas of society and industry in the years to come. Hopefully allowing many more visible role models to be out there for the next generation to relate to, as I know I certainly would have benefitted from some as a young person growing up in the countryside. 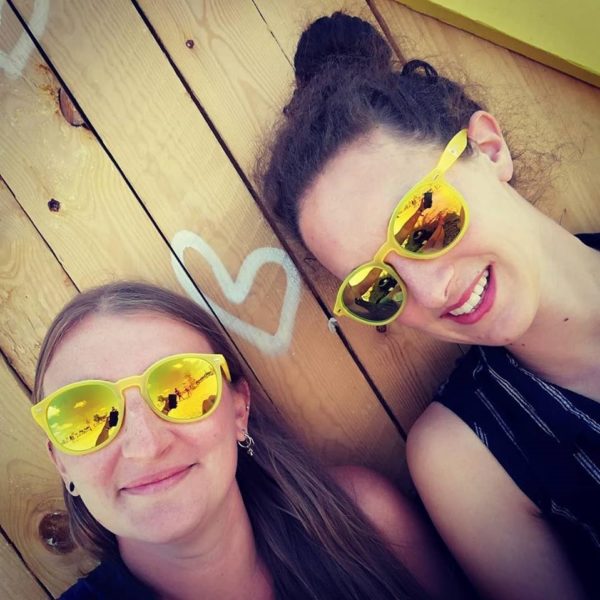