I am a small farmer in central Connecticut. The legal name I was given at birth is that of my father, grandfather, and great-grandfather. It’s also the name that nobody but lawyers, doctors, and insurance professionals actually call me by because, also at birth, I was immediately called the same nickname as my father and grandfather. Both were truck drivers, military men, generally well-liked farmers…and neighbors. I’m Buddy.

My parents met at a small country fair competing in the dairy barn. My mother was blond and blue-eyed and drove a new GMC pickup truck, my father was in over his head. They married soon after in a little white church near the country fair where they met. Years later, in her back garden, my father’s mother hosted a baby shower for my mother, pregnant with me. Along with the Farrah Fawcett hairstyles and large Jackie O sunglasses was a white frosted sheet cake with blue writing that said, “Hope it’s a boy!” The cake could have just as easily said “Hope he’s a farmer!”

I grew up on my parent’s farm, which they bought when they married and is beside my grandparent’s farm and baby shower site, which is now mine. The two properties practically share a driveway. They had the same work ethic on the two farms, but very different operations. The men did the tractor work, and the women did everything else. My parents had a small dairy when I was very young and my mother was the neighborhood “milk lady”. That evolved into a replacement dairy heifer operation during my childhood. They now raise purebred beef cattle.

By “they,” I mean mostly my mother. Her parents and grandparents had a small farm, too. She is kind of Wonder Woman, if Wonder Woman’s cape were instead a Carhartt vest. She named, fed, and raised dozens of calves a year while managing their rental properties. She ran a home daycare, grew a large enough vegetable garden to put food by for the year, and served on every local and regional agriculture association possible while my father was driving a truck during the day. He’d have a snack after work and then get out on the farm. Weekends weren’t for rest. We worked, I had chores and responsibilities. In retirement, my grandfather financed my uncles and together they created a business on his farm. They grew vegetables that were sold at local farmers markets and eventually had orchards of apple, peach, and pear trees to sell fruit in local grocery stores.

My brothers and I earned pocket money working for my grandfather. They spent theirs on tools and trucks; I bought the “right” clothes and figure skating lessons. They got four-wheelers and rode through the mud while I had a horse to jump stonewalls and leather riding boots that kept me clean.

While they almost share a driveway off our town road, the two family farms are also connected by a back driveway. During elementary school, I walked this road every morning to meet my cousins at my grandparent’s home to then go to the street to get the school bus from their driveway. The idea was that it looked like we belonged to a house and not a small, obscure driveway. I’m not sure I ever felt I belonged, a house in sight or not.

I wasn’t the boy wished for on cakes by country farm folk. I didn’t know I was gay early on, because I didn’t realize that “gay” existed or what “gay” was. Enamored, I had my first crush on a slightly older neighborhood boy when I was eight. I didn’t know, but I always knew. Perhaps it was self-preservation or possibly willful ignorance? Maybe it was both?

Regardless of how I never felt complete or accepted, I never really wanted to leave or go too far from home or the farms. I went to a small school for Marketing. I wasn’t immediately “out” in college and tried to hide the truth by accepting the advances of girls. And then I met “him” at 19 and stopped trying to hide who I was. I gradually became more comfortable with myself, confident that my friends wouldn’t abandon me. I worked for a huge corporate communication company after college. They were accepting and they liked my work ethic. I moved to a smaller, better company and into a better position. I was told in one round of interviews that they liked the idea of hiring a “farm-boy” because they suspected I therefore knew what hard work was.

In an effort to keep their farm going, my grandparents eventually turned everything over to my uncles who had been managing the orchards and gardens. They were life-long rivals with completely different expectations and temperaments. It didn’t work. I moved home to help take care of my beloved grandmother, who had developed dementia. I gave myself one year to help determine her care needs and figure out my next step; I didn’t like spending money on rent and missed open spaces and physical work.

Reacquainting myself intimately with the virtually unchanged surroundings of childhood was humbling. The wallpaper and paint, curtains and silverware were all the same. So was the land – the quiet of mornings in the country, the afternoon sun setting behind the resilient old trees I had mowed around or ridden past in my youth. The riding boots no longer fit, but even the horse was still there. It was as if only I had changed.

Eventually my grandmother passed. My grandfather had life use of their home and farm. Almost every night, I’d visit my and do household chores while he had dessert before bed and we’d chat, he’d tell me family and farm stories. He was less than pleased with the actions and decisions of the sons he had entrusted with the farm. I was approached at different times by them with the same idea: I should take on the farm. Or rather, unspoken, I could take it off of their hands. Nothing ever felt so ridiculous or obvious at the same time. There were other family members potentially more up for the task. But I loved it most, I needed it more.

My grandfather lived long enough to see me successfully put together a deal for one uncle. I know it made him happy that I was trying to keep the farm in the family and there was a renewed excitement in his nightly stories. Drawn out, the next set of negotiations would test every fiber of my being; physical, mental and emotional. It took a decade and numerous lawyers, realtors, appraisers, surveyors and untold sums of money. Money I had saved, equity I had earned, and substantial loans given to me unsolicited, like lifelines from people who had no idea they were actually saving what I couldn’t see was my dream, while simultaneously proving that I am loved and I do belong. There was no paperwork or formal agreements, just “Use this, figure it out and we’ll go from there later.”

My salary at the small-but-better company is respectable, but it isn’t enough to clear my debts and save the farm. It became apparent that if the farm doesn’t contribute, it wouldn’t survive. I can’t leave my “real” job in marketing. The words I fall back on time again are those of Arthur Ashe, my mantra: “Start where you are, use what you have, do what you can.”

Start where you are. Before I took over the farm, the orchards had been removed, the gardens had become hayfields, barn roof was leaking and the equipment had been sold. But there was space, the land – remnants of the past, and the possibility of a future. In speaking with friends about my ideas and options, one suggested I think seriously about doing a Community Supported Agriculture program, commonly referred to as a CSA. As a prepaid subscription to a farm’s produce for an established growing timeframe, a CSA program provides its shareholders with a weekly supply of farm-fresh produce and creates a rare, viable source of financial security for the farmer.

Use what you have. My grandfather’s rototiller was in the barn, I put it to good use after my father helped plow the fields back into gardens with his tractor. The first year I tried to pull together a CSA program out of a small vegetable patch I had eight customers, mostly friends and family. I learned throughout that first season and even made a small profit. Your network equals your net worth… Fortunately I make friends and conversation easily. Interest in my CSA continues to grow and my father still helps to plow and reclaim fields for new vegetable garden space. I had fifty-five customers for the 2018 season.

Do what you can. At first, I thought I could do something small around the farm to make a some money to help with upkeep. Things change, one adapts or doesn’t. I did and I still am. The physical work was (and is) like therapy. Everything happens for a reason. Perhaps if it weren’t for the years of uncertainty, frustration and tears shed I wouldn’t know that this is where I am supposed to be and what I am supposed to be doing. Sometimes I still feel like the kid in figure skating lessons; constantly riding the edge of losing it all and falling hard or remaining focused and making something exciting happen.

I’m still finding the balance between work, family, the farm, friends and dating. It’s probably a good thing I went through the worst of the property struggle single, I would have made a terrible partner. I’m fortunate to live in a very progressive place – my schedule is difficult, dating isn’t. It’s like a garden, really – the more time and effort you put into it, the better the results are. Perhaps I present my produce differently than other farmers – in vintage baskets, on gingham tablecloths with sunflowers in vases, polished – or perhaps not, we all do what works for us. Maybe it is unexpected to have a ‘gay farmer’, but it doesn’t come up. My customer’s children love my farm and call me ‘Farmer Buddy’. They tell me which vegetables they like more than others, bring me birthday presents and send Christmas cards. They run to give me hugs and high-fives when they see me at parties or events. I’m just their farmer. Maybe that’s progress, maybe that’s hope. 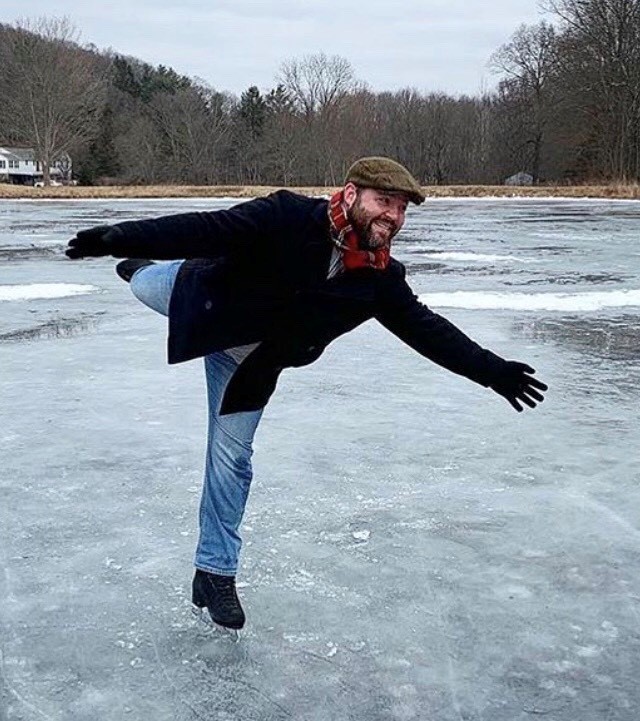 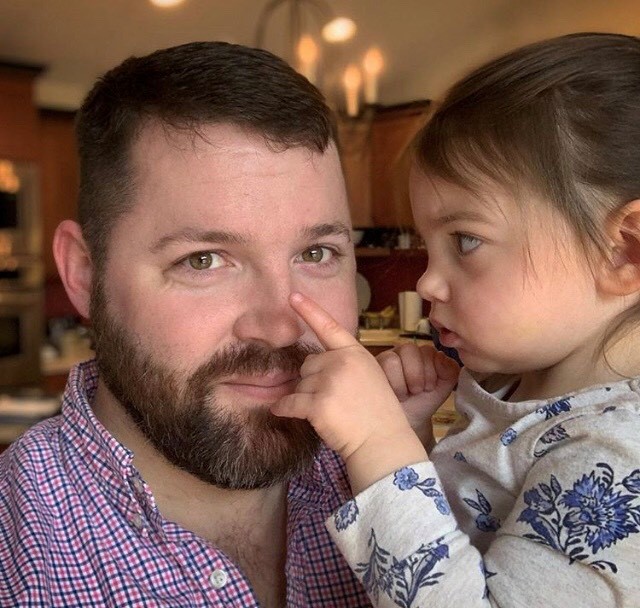 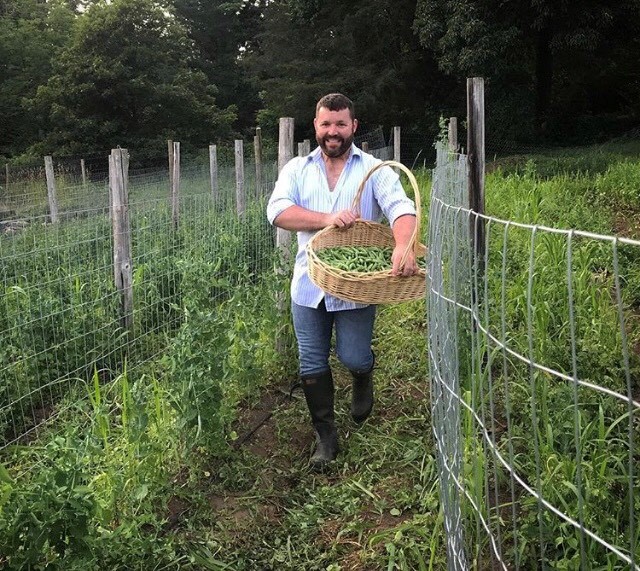