Meet two people who fell in love, Lynn and Dana…

This isn’t where it started, though. Roll back to 2005. And, as those of you older than dirt will remember, this was when when web cams were few and far between and cost an additional mortgage on your home.  No such thing as Skype or Facebook.

Sounds like I’m talking about a million years ago.

America is a 9 hour flight from London to the most of the east cost, and this is where a 4500 mile journey begins.

Dana is American, and me, I’m Lynn from Norfolk in the UK. We met in a chat room for Butch Femmes. What attracted me to chat with Dana was her handle of “Landscaper”… ooohhh I thought, I’m a landscaper too.

And so it began. We chatted for about 8 months until finally I asked for her phone number to call her. We learned of our commonality of landscaping gardening and our dreams.

I was the owner of a very successful landscape and garden design company and I owned a nursery growing perennial plants, shrubs and trees too. I also purchased an established grass cutting grounds maintenance company, with all the equipment. And hired plenty of local staff and set about tendering for new work.I converted an old cricket pavilion to an organic green grocery and fruiters on my nursery.

But in 2000 I began the start of something that was literally going to change my life. In 2004 following failed knee replacements I had an amputation of my right leg above knee.

Everything started to go wrong and my business started to fail because I couldn’t get around to clients to visit with them and discuss their plans. You see, not everyone has a wheelchair accessible home and garden. And bit by bit I started to fold my businesses. The nursery went first, then the design side, and grass cutting ground maintenance at the end of the cutting season.

Meanwhile I’m chatting to the landscaper lady in North Carolina.
What an interesting woman I found her, she worked for a company that laid plants out in all the Home Depot or in her words “Homodepot”
She handled all the plants, designed layouts and took daily care of all the stock. She loved her job, but hated the heat from the black tarmac when it was 114 in the shade. And the plants needed constant watering.

Dana told me about her own history of farming tobacco on hundreds of acres and the issues with hand picking, drying, curing and selling the finished product.

In March 2006 I opted to go and see this mystery woman in the flesh, and planned a flight to North Carolina. Ten days later I met the love of my life.
We talked of our plans, our future, because we were certain we would have one.

Dana’s dream was to found and build her own nursery on the land adjacent to her home – about 1/4 acre site neatly placed between granny’s old house, the farm and her Mum and Dad’s house. And so our journey of purchasing a greenhouse, ground cover, clearing land, and accumulation of pots, and tables to create “The Secret Garden on 904”

In 2007, at the end of the summer season, I had been back to the USA 3 times, and on my 4th trip I opted to stay longer. We were creating a beautiful nursery as well as growing Daylilies (Hemerocallis ) in fact our personal collection of those was huge – spending hundreds of dollars on just one plant to grow divide and then re sell. I stayed longer and longer, and eventually stayed 6 months past my visa return date.

We came back to the UK in 2009 as Dana had been very poorly and I knew she needed a break from life in North Carolina. So in the winter when everything was quiet, we toddled back here.
2010 spring saw us headed back to North Carolina. I knew it may have been difficult to get back in the country but, as the USA didn’t have a biometrics system back then, I travelled again on my visitor visa.

Life for us was very busy with our new project and I again overstayed. I knew I was in a very desperate situation and it probably wouldn’t be without penalty.

In 2012 Dana proposed to me. The law had not yet changed to include all 50 states of the USA but IOWA was progressive enough to be among the first to allow marriage between same sex couples.

Our business thrived and even though I was wheelchair-bound, we still managed to maintain customers, and work in our own garden.

In 2013 we both came back to the UK. Dana obtained a visa so she could be there to help me. Sadly we closed the nursery vowing to open it back up again once we returned together to the USA. We started the process of immigration for my return to the USA

At the latter end of 2015 we were told by our friend that our home had been broken into and everything had been stolen. Clothes, including socks, jewellery and kitchen ware. And so much more. Wheels and brakes from our vehicle propping it up on blocks.

And after that bit of “great news” Dana’s father suffered a heart attack and I insisted she went home to be with him. So began our life together with an ocean between us.

In 2016 I went for my first interview at the American Embassy London and was refused. We were asked to fill out form I-601 – literally a written story of our life together.

In December 2016, Dana came to visit for six months but during this time her father passed away. She was very ill herself at the time and was rushed into hospital. And once better, she made her way back to NC and to be with her Mum during this terrible tragedy.

In late 2018 we had an excited message from our attorney to say that our I-601 had been approved and that it was excellent news. I called Dana and told her “Honey, get ready I am coming home”

I arrived at the allotted time, laden down with documentation and handed over my passport, swore my oath and stood in front of the immigration officer. Once again I was turned down.

I was shaking, heart broken. Unsure, unclear. And totally confused.
I got back to my car. Called Dana at home in NC and told her the whole sorry scenario.

And so as of today, our attorney is working on our case.

The good news is that this month, after an 11 month separation, I welcomed my gorgeous Dana back to the UK for 5.5 months . It’s not ideal, it really isn’t, but it shows strength and the true grit of our love and our togetherness.

In the US, our nursery stands as an empty shell and our home a mess after Hurricane Florence ripped the roof off. But we have our small back yard growing area, and I’ve grown all the perennials for our virgin front garden, we are expecting a litter of boxer puppies in the first two weeks of June and we are enjoying re-kindling our love for one another.

Don’t for one minute think that a 4500 mile journey is a simple plane ride. It’s so much more when you fall in love with someone from another country. It’s not just a journey, it’s a mammoth trek, filled with potholes and pain. Separation and anxieties.

We have been through a lot but we have faced it together. Wish us luck as we struggle with governments and state departments and ever growing fees for our hard working attorney. 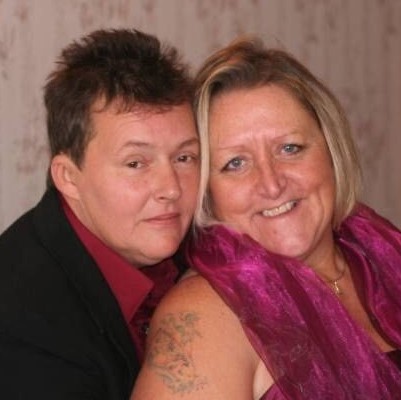