As a journalist, I’m used to asking others to share their stories – this is the first time, I’ve been asked to tell my story. Indeed, the first time I’ve ever spoken publicly about my sexuality. That’s not to say I hide it away. This isn’t some great “coming out” story on Agrespect. Those who know me…know me. It just hasn’t really been an issue within my role as either Director of Programming for the Lincs FM Group of radio stations, or as presenter and producer of The Farming Programme. At least, I don’t think it has.

I was, actually, quite late to the party, in that I didn’t actual come out to my friends and colleague until I was in my early 30s. I’d known I was attracted to people of the same sex since my teenage years – indeed, I first knew something was different when I was 9 years old and a friend and I were playing a daft game and ended up laying on top of each other. Nothing happened, we just lay there giggling and were too young to realise what was happening, it was just silly fun – but I knew I prefer boys to girls.

I’m from Scunthorpe, a big steel town and my father was a steelworker who liked a drink, so I certainly kept my feelings to myself, when at home. Indeed, I kept up the pretence quite well for some time, dating some very beautiful women and even getting engaged to three of them – although non ended, thankfully, in a trip down the aisle! At least three of them knew my preference and I was quite open to them that I was bisexual – attracted to individuals, rather than any particular sex. They were cool with it and I’m still in touch with most of those I dated – one still has our engagement ring! Another was my “best girl” at my marriage, three years ago, while two others later revealed they too were conflicted at an early age and are now living happily in same-sex relationships themselves.

I guess the main reason I kept my sexuality a secret for so long was because of my grandparents. I idolised them. They were, effectively , my surrogate parents but were from a very different generation and while I’d hope they would have accepted me, it would have been quite challenging for them. I wasn’t prepared to risk it not working out. They saw me as the perfect grandson, so I wanted to live up to that aspiration. Get a good job, find myself a wife, settle down have children blah blah blah.

My grandfather was German. He ended up in this country as a prisoner of war, working the land – where he met my Nanna. It’s where my interest in farming first started, as her family were farmers. Now, history tells us very clearly just what the Nazi view of homosexuality was. My Grandad was the kindest, sweetest man, I’ve ever met and while he disagreed violently with the Nazi regime, he was forced in to war as part of the Hitler Youth organisation. Being captured, he later said, was the best thing to happen to him. He sat out the war, did what he enjoyed most – working on the land – met my Nanna, fell in love, settled down here and never went back. However, when the so-called sins of homosexuality have been drummed in to you, over-and-over again and – in the 70s/80s as I was growing up – the only gay men you ever saw were the stereotypical camp men on TV, then changing that attitude is quite the hill to be climbed.

So, I didn’t! Only after he died did I finally decide to reveal all.

Another relationship (with a woman) had ended and it made me question just what I was doing, to confront the real reasons why these relationships weren’t really going anywhere. I’d also become close to a friend who was, himself gay, and seemed happy in his life. Nothing happened between us – indeed (being an only child) he’s the brother I never had and was my best man…alongside my best girl…at the wedding. Seeing how he led his life made me realise that there was no shame in it – if shame is the right word. I could be happy in a same-sex relationship. I remember it well. I had planned a holiday to Portugal and spent the week on very long walks, thinking about the future. I decided that when I stepped off the plane, back in the UK, that would be it. I would be gay and I wouldn’t care who knew. I wouldn’t turn up at work in a rainbow suit, shouting from the rooftops in great detail my sexual preferences – but I would sit down and tell those closest to me, including my colleagues. I was nervous. Especially about one or two friends but, without exception, all were brilliant about it. It helps that radio is part of the creative industry that has more than its fair share of openly gay people working for it.

A couple, I was told, were talking behind my back saying that they couldn’t believe it and were in shock. However within a few weeks they discovered that, actually, to quote Theresa May: “Nothing had changed.”

I was still the same fool, playing pranks around the office. We shared the same daft conversations and I was – ultimately – the same person I’d always been. I was, perhaps, a little happier within myself and it did give them extra ammunition if they wanted to poke fun at me but I always gave as good as I get and none of the jokes crossed the line into being homophobic. Maybe I was lucky with my choice of friends and colleagues. I’m sure others aren’t as lucky.

I’m now happily married, to Daniel, who – along with my Cavpoo dog Mitzee – completes the family.

Has it affected my role at The Farming Programme? As far as I’m aware, no-one has declined to appear on the programme because of who I am. It’s fair to say, unless they follow me on Twitter or Facebook, most wouldn’t even know as it’s not something that comes up in our weekly round-up of agricultural discussions. Those that do know certainly don’t have a problem with it – or with me.

In one way, every day I find I could be “coming out” to someone. The joy of Facebook means former school friends, and even family members who I’ve lost contact with, will get in touch. They’ll then see my photos and my updates and realise that I have a husband – yes, he’s a man!

Likewise, when at events, I – along with most of you reading this – will face the inevitable questions: “Are you married?” “What does your wife do?” “Do you have children?”

Sometimes, I’ll answer vaguely and change the subject. It helps that Daniel – as “The Nail Male” – is a nail technician, spending his days doing working magic on women’s nails. So, if I want to be vague I can always say “Yes, I’m married.” “They’re a nail technician.” “No, I don’t have children…just a dog, which thinks it’s a child!”

I don’t act vague because I’m embarrassed but because there are just some days when you don’t want to get into such discussions. It also depends on the individual. It can be awkward for them, realising they’ve jumped to a conclusion that many make – and if I’m not going to see them again, it’s not important and I hate awkward situations. At other times, I’ll explain that my “wife” is my “husband” and then the conversation carries on as normal.

Would I change anything? I have very little regrets in my life. Everything that has happened, happened for a reason and has made me who I am today. Had I come out sooner, I might have met someone else, and wouldn’t now be married to Daniel.

However, I do wish I’d been honest with my grandad. Thinking about it rationally now, I would have used, as an example, the horrific abuse and bias that had been shown towards him and my Nanna.

Imagine being a German, living in Lincolnshire (Bomber County, don’t forget) immediately after the Second World War. He was hated, called every name under the sun. Some of my Nanna’s family ostracised her, for dating – and later marrying – a “Jerry” after “all they’d done to us.”

He was a minority being targeted through no choice of his own. It wasn’t his fault that he was born in the life he was, in Germany under a mad dictator. He was still the same man. That gentle giant, who didn’t want any trouble. He didn’t choose to be German at that time in history, it’s just a part of who he was.

I’d like to think, if I had my time again, I’d turned this on its head. Explain that I’m still the same grandson. That I was born into this life. I didn’t choose my sexuality, it’s just a part of who I am.

If you’d like to contribute to The Farming Programme, then please do get in touch: sdunderdale@lincsfmgroup.co.uk You can hear the programme on commercial radio stations Lincs FM, KCFM, Compass FM, Rutland Radio, Ridings FM and Suffolk First every Sunday morning with previous editions of the programme available online here: http://www.lincsfm.co.uk/on-air/podcasts/farming-programme/

If you’d like your nails doing and live near Lincoln, then search for the Nail Male on Facebook. 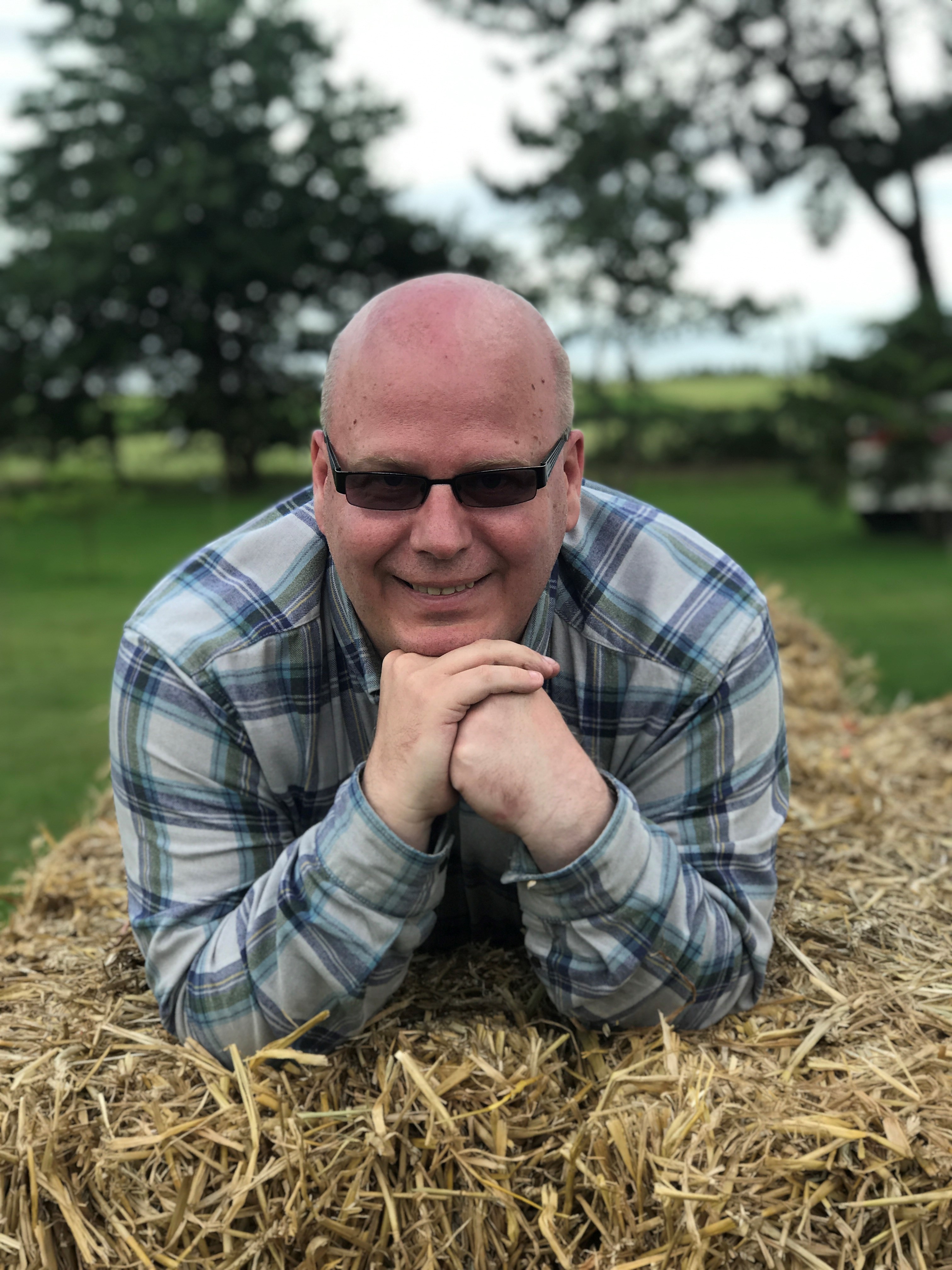